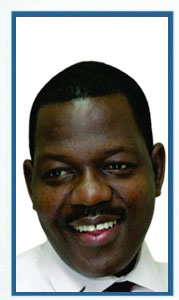 Not only is it good to be part of a winning team, it is best when you make a difference. No titles; no bank balances; no acquisition, wealth or investment compares to making a difference. Nothing outlives you better and fulfils you more. As Steve Jobs said, “…Don't educate your children to be rich. Educate them to be happy….”. I believe the best and most enduring happiness comes when lives are touched because of you. A real difference is only possible through selfless sacrifice which impacts society and a new environment evolves, in part, at your behest.

In the early 1990s, I was a rookie with Aina Blankson, LP. Thrown in the middle of this $950Million high profile litigation at the Federal High Court, nothing consumed the partners beyond securing an interim order of injunction to lift an imminent threat to a Canadian vessel within Nigerian waters. Walking out of the courtroom basking in the euphoria of the injunction just secured, nothing prepared me for the outburst that followed “…who cares about the injunction and the strength of our case…..that vessel must sail immediately as delivery deadlines must be met….” the Canadian representative exploded on the telephone. After his tirade and vituperation, we explained the legal steps intended and likely timelines. Truthfully, I doubt if he was listening as suddenly he said, “…Tell you what, call the lawyers while I call the Banks. Please suggest mediation and have us go into mediation immediately… ”. Even though mediation as a legal parlance was Greek to me at the time, my erroneous assumption was that mediation is a variant of arbitration.  How wrong I was and special thanks to Harry Blankson who gave me a book called “Getting to Yes”, which turned out to be the best Law School ever attended. Getting to Yes got me to Today.

The combined effect of the mediation success and exposure which “Getting to Yes” brought about were three-fold: first, Aina Blankson established an Alternative Dispute Resolution department and purchased all the books, working paper series and tapes then available at the Harvard Program on Negotiation. Second, I resolved to champion the cause of ADR in Nigeria by ensuring that the experience and exposure garnered came to the consciousness of judges, lawyers, the Nigerian Law School and anyone in the business of advisory services. And the third most important decision of all was to ensure that the first court connected ADR Centre in Africa (The Lagos Multi-Door Courthouse) was established which decision led to the incorporation of Negotiation & Conflict Management Group (NCMG) as the non-profit organization to champion the cause.

The very first NCMG Board of Governors meeting was held in the conference room of Aina Blankson on August 26, 1995 with monthly board meetings thereafter. The building blocks of what today has become an international and respectable brand were laid by the incredibly decent and selfless Nigerians that joined Justice Kayode Eso and myself in birthing the organization. They include Justice Rosaline Omotosho, Mr Gamaliel Onosode, Chief Arthur Mbanefo, General Tunji Olurin, Professor Itse Sagay, SAN, Professor Isabella Okagbue, Alhaji Adamu Ciroma and Mrs Margaret Tilley Gyado. Thereafter, Dr Christopher Kolade, Professor Yemi Osinbajo, SAN, Mr Moshood Akanbi, Ambassador Audrey Ajose and Justice Dolapo Akinsanya joined the board while Justice Muhammadu Uwais later replaced Justice Kayode Eso as the NCMG Board Chairman. The privilege of working with these altruistic and wonderful thinkers is truly priceless.

Establishing The Lagos Multi-Door Courthouse within the premises of the High Court of Lagos was not just tough but extremely challenging and could be likened to pulling hens teeth. The judiciary simply balked at every attempt until after six years of relentless campaign, lobbying and endless push which eventually received the nod when Justice I. A Sotuminu assumed office as the Chief Judge of Lagos State. With the caveat “I will provide you space but no money”; without hesitation, I accepted her terms even though the initially allocated space had just about enough room for offices without any for mediation. Looking at the sprawling near empire which today houses The Lagos Multi-Door Court-house, it is difficult to explain to anyone that we did not start out that way but gradually grew to become the present. With nostalgia, I recall the early days when all we had were a couple of rooms turned offices without any for mediation. I do recall the repeated visits and appeals to the then Chief Judge, which eventually resulted in the criminal court closest being annexed for the LMDC. Subsequently Courts 9 and 10 including a storage space vacated for The Lagos Multi-Door Courthouse. It is quite an interesting tale with the most exciting being the weekend that the passage from the Court Library to the newly acquired courtrooms was blocked off without seeking any approval as I knew such was unlikely to be agreed. Funded in its entirety by NCMG, Aina Blankson and the meagre resources at my disposal at the time, the unfettered financial support and commitment of the DFID through the SJG Program of the British Government was Heaven sent, especially given the numerous challenges at the time. I remain indebted to the pioneer staff of NCMG, the members of the LMDC Working Committee and of course Ashoka for without their support during those trying days there might not have been today.

With the multi-door courthouse already replicated in about twenty state courts in Nigeria including the Federal High Court, National Industrial Court and the Court of Appeal, the contribution of NCMG and Aina Blankson, LP to meaningful change is truly remarkable. While we remain proud of our achievements, the promise of tomorrow holds the most promise.